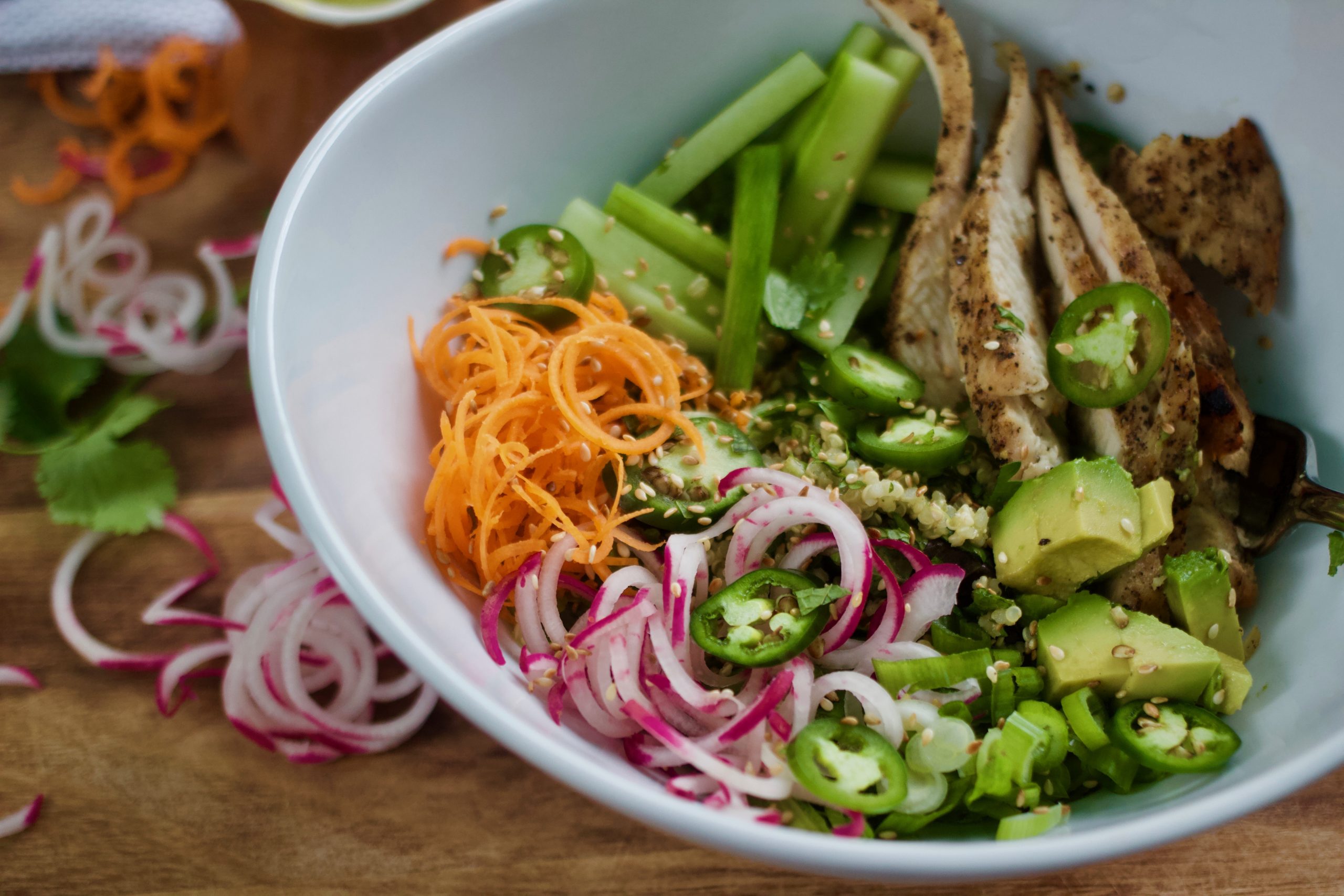 Grilled chicken and quinoa meet a colorful bunch of vegetables including radishes, cucumber, serrano peppers, carrots, green onions and avocado in this spicy and beautiful summer salad.  The dressing for this spicy Banh Mi chicken & quinoa salad is bright, slightly sweet and ever so fresh with both cilantro and mint teaming up with fresh lime juice and honey.

Gardening has never been easy for me. It’s frustrating because it’s something I very much enjoy.  So this year, when my husband, Matt, surprised me with a bunch of seed packets and proclaimed this was the year we would figure things out, I admit I was skeptical.  Our best gardening efforts in years past had yielded very little, even with the advantage of purchasing the giant baby starter plants!  The price tag was right on the seed versions, though, and I was motivated and intrigued by Matt’s optimism.  Maybe I could do this!

Fast forward about 6 weeks…two-thirds or so of our seeds made it into the seedling stage, but, unfortunately, no more than half survived the “hardening off” phase and were actually transplanted into our yard or small raised bed successfully.  It’s now late July, and we have yet to harvest our first tomato or pepper and have had ONE teeny tiny zucchini.

However, turns out, shelling peas and baby mesclun greens have been really successful for us (and they can be directly sowed into the garden), so successful that I’ll continue growing those from seed every year to come!  The peas don’t make it out of the back yard after my kids harvest them multiple times a day (that doesn’t disappoint me too much!), but the pretty greens beckoned to be turned into something delicious and a colorful summer salad seemed just right.  Best part? My older two girls were so proud of our crop, they ate a remarkable 4/5 and 1/3 of their Banh Mi Chicken & Quinoa salads when we sat down for dinner!  The almost-two-year-old also loved the deconstructed version.

To simplify this some, I suggest making the dressing ahead of time, up to one day in advance, as well as cooking and refrigerating the quinoa.  You can also save time by chopping up/grating a bunch of the sturdier veggies, and just store them in the fridge until it’s time to assemble. I used my spiralizer because I wanted pretty pink and orange spirals, but I also had time to spare. Next time, I may grate the radishes and carrots on a box grater. Lastly, we have the grill fired up most days of the summer and it’s easy to grill a few chicken breasts, but in a pinch, stove-top grill pan or a shredded rotisserie chicken would work well too!

Cook quinoa according to package directions and season with ¼ t. of kosher salt. Set aside to cool.

Add all dressing ingredients except olive oil to a blender and pulse a few times.  Stream in olive oil and blend until smooth, about 30 seconds.

Preheat a grill to medium high, about 400-450 degrees or heat a grill pan to medium high. Brush chicken breasts with 1 T of olive oil and season with salt and pepper. Grill chicken until cooked through, about 6 minutes on each side. Set aside to cool before thinly slicing.

Toss together mint, cilantro, baby greens and quinoa with half of the dressing in a large bowl. Divide between four bowls. Arrange prepared carrots, radish, cucumber, avocado, scallions and sliced chicken around the sides of dressed greens/quinoa.

Drizzle bowls with remaining dressing or serve extra dressing on the side. Top with sesame seeds and sliced serrano chilies.

Searching is in progress
2 shares