In preparing for a different sort of Halloween this year, my daughters brainstormed some treat ideas to replace the standard trick-or-treating tradition. There were pleas for these candied apples, from a Pioneer Woman cooking show the girls watched with me last Thanksgiving. Although beautiful, we’re not big white chocolate fans around here (OK, I’m not). I also don’t know what’s really in those “chocolate discs”. After settling on cupcakes, my 6 and 8-year-old daughters dreamed up this combo of cinnamon cupcakes and pumpkin frosting. And, guess what? They’re…dreamy!

I’m not sure there’s anything better than going door to door, collecting handfuls of candy, so I realize what I’m up against. But, these cinnamon cupcakes with pumpkin spice cream cheese frosting coupled with the promise of endless movies at home may be a decent consolation. We will see! 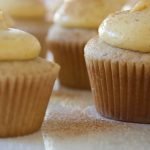 Searching is in progress
8 shares